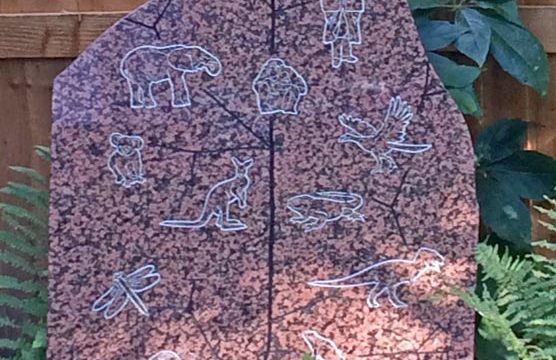 In 2009 I carried out a private commission to make site specific interventions in a North London garden. Two of those interventions were ephemeral / temporary (a fake spider’s web in a forked apple tree and some fake kiwis in their (fruit-bearing) kiwi tree) but one was permanent. The commissioners (a couple of scientists) had a wide range of mutual interests including archaeology / ancient history and zoology / evolution so the major feature was a red granite stone in the shape of the Rosetta Stone (in the British Museum) with the Darwinian tree of life carved into it by monumental masons (which the masons loved doing – it made a change from headstones!). These photographs show it on the day it was unveiled and ten years on.