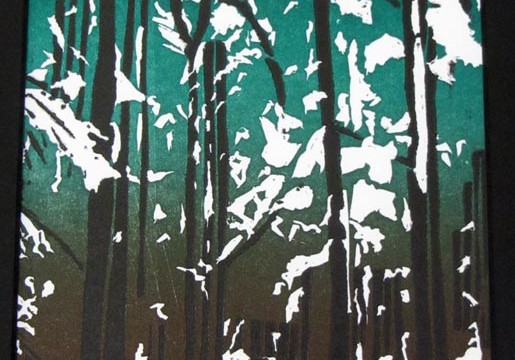 Other places – other techniques!

Vases, Roskilde, lithograph, 2011 – Roskilde was effectively the capital of Denmark from Viking times until c 1400 when the Royal court moved to Copenhagen.  Danish monarchs continue to be buried in its cathedral.  As you exit the train station, you are confronted by three huge vases set in a pond in the town square and this lithograph is based on some photographs taken during a visit to the cathedral and the local Viking Ship Museum.  This was my first lithograph.

Pond, Herstmonceux, lithograph, 2013 – Around Herstmonceux Castle (East Sussex) there is a walk through bluebell woods and past the Science Centre.  Following this route I took a series of black and white photographs (on 35 mm film) as source material including some of a large fallen tree (The Hollow Tree) and this pond where I was interested in the combination of natural textures (reeds, over-hanging branches etc) and reflections.

Capaldi Gardens, Morocco, lithograph with hand tinting (pastels) 2014 – This is a lithograph with hand-tinting (pastel).  In February 2014, a few weeks after the death of my mother, we went away – the first break we had been able to have for some considerable time – and Morocco is, for us, an exotic destination.  One of the places we stayed was an oasis of green, palms and peace called The Capaldi Hotel in the foothills of the Atlas Mountains.  I took many photographs of the buildings (mainly interior) and the garden.  This is a composite image of different elements of that garden.

Trees, Herstmonceux, reduction vinyl cut, 2015 – On the same walk around Herstmonceux Castle as the pond there is this path through a group of trees which I felt drew you in, made you want to walk there, but, at the same time, was slightly eerie.

Essaouira, Morocco, solar plate etching, 2015 – During our visit to Morocco we went on a day trip to Essaouira.  Amongst the many photographs I took was a single one of seabirds on the wet sand at the water’s edge, again demonstrating my fascination with shadows, reflections etc.  A solar plate was made from a digitally enhanced version of that photograph.

Valencia, Spain, solar plate etching, 2015 – During a visit to Spain we spent a couple of days in Valencia where there is a famous walk along a dried up river bed (the Turia River Bed Gardens).  During this walk you pass several bridges including this one which is over a pond, thus creating interesting shadows and reflections.  The plate was made from a digitally enhanced version of one of the photographs I took of that bridge and plays with abstraction and realism.