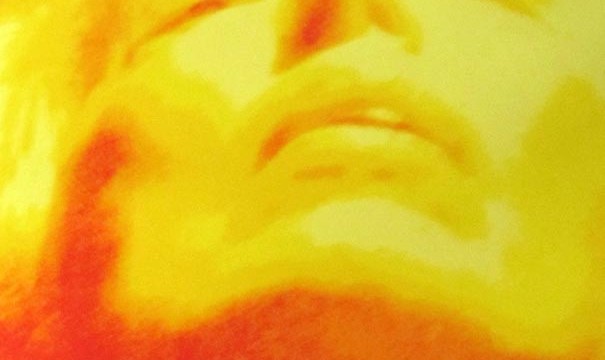 Figurative work is not typical for me (indeed you would need to look hard to find people in my photographs or any of my work) but I have done a few self portraits (with nods to, for instance, Peter Blake and Andy Warhol).

What makes me me?, mixed media on canvas, 2007 – in response to a College task regarding identity I created a mixed media acrylic painting on canvas incorporating various 3D elements and collage.  This artwork was destroyed some years ago but I retained three elements: the small wooden cross, the painting of my hands, and the small self-portrait wearing my “badge jacket”.

I Took a Selfie but ………., screenprint, 2014/15 – one evening I noticed that a combination of darkness through a stained glass window, ceiling lights and an illuminated mirror created an interesting landscape of light and shadows on my face.  So I took a selfie.  This screenprint marks the start of my exploration of using multi-separation photographic positives.

New York, USA 1980, solar plate etching, 2017 – around Easter 1980 (early April) I visited New York for the first time.  Just before I went my father gave me his Yashika Mat double reflex lens camera which uses FP4 film giving 2” x 2” black and white prints.  I hadn’t really taken any photographs before but haven’t stopped since!  Whilst in New York (during the Transit Strike – I had to walk everywhere) I visited as many galleries as I could including MOMA.  The original photograph upon which this work is based shows a large piece of reflective metal on which a modern take on The Turkish Bath (1862) by Jean-Auguste-Dominique Ingres (1780-1867) has been enamelled.  The reflections show me taking the photograph, other works in the exhibition, and other visitors and represents the start of my photographic recording and use of reflections which is now such an important feature of my work.  The original photograph has been scanned and digitally manipulated and then processed onto a solar plate.