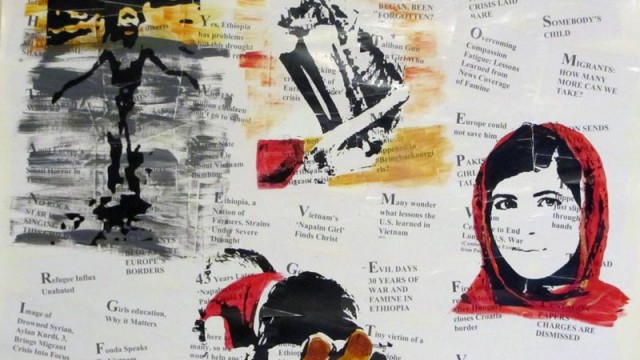 Broadly speaking my work is divided between the scenic and the serious with The Crow falling somewhere in between.  My serious pieces tend to address political, topical or environmental issues – often related to war and / or other man-made or natural disasters.

The concept for the AFTERMATH series was triggered by the bush fires at Martinsville, Australia in February 2009 and the series looks at the havoc wreaked by Man, Nature or a combination of the two.  Initially these were going to be large mixed media paintings, unusually based on other peoples’ photographs rather than my own, and I started a doing one based on a newspaper photograph of this event (where some of the fires were believed to have been arson but the wind and drought conditions spread the flames) in early 2010.  Later, however, I decided that my interpretation of the subject matter and my drawing style were more suited to rendering these images as hand-pulled lithographs and the layering process that involves.

Aftermath I and II, (being a pair, 2012, made together with only one layer – the skeletons of the buildings themselves – being different) focus on the deliberate destruction wrought by Man.  I was struck by both the amazing similarity of the ruins of the Kreuzkirche, Dresden and the World Trade Centre (which I used to visit on business) and, given the respective dates of the events concerned, the fact that Man hasn’t learn anything during that time combined with the historical resonance that both sites have including Dresden being bombed again in World War II.

Aftermath III and IV, 2013, are again a pair and look at how Man destroys Nature (as represented by the rain forest being turned into palm oil plantations and the draining of the Arab Marshes by Saddam Hussein during the 1980s and 1990s – an act which was reversed following his overthrow but then Nature stepped in with a severe drought).

Aftermath V and VI, 2014, were, effectively “by popular request” and look at the First World War (it being the anniversary year) particularly the Flanders fields and Ypres, and Hiroshima – the parallels between the images of destruction are uncanny!

Other topics I have considered seriously in this context look at how Man and Nature collude / collide and include New Orleans / Hurricane Katrina, where Man had built a city below sea level but protected by levees which were then not maintained properly, and the Japanese Earthquake and Tsunami (Fukushima) where nuclear reactors had been knowingly built in an earthquake region but were not in fact earthquake proof.  However, I have not made any lithographs for some considerable time so I suspect were I to return to these topics it would be in a different medium / technique (almost certainly screenprints).

SKYLINE – On 11 September 2001 (“9/11”) the twin towers of the World Trade Centre (the tallest buildings on Manhattan) were destroyed.  This event was not only an iconic historical event but has a personal narrative as I used to go there from time to time for business meetings.  I am haunted by the way that this one act of terrorism has for ever changed one of the best known skylines in the world and the geopolitical landscape.

In 2007, whilst working on the idea of “A Sense of Place”, I drew three simple lines – before, after and future.  I envisaged these as screenprints or paintings but always together, as a triptych.  In 2014 I revisited the subject, drawing a new trio of outlines of New York.  These were realised as screenprints (Skyline Triptych): in black on white paper; in white on black paper; and in black diamond dust on black paper.  I then asked myself “what if”it had not been New York but somewhere else?  If you look at the skylines of other cities in other continents they are all essentially the same.  This led to my making Skyline Continuum using two vintage adding machines and drawing (to scale) continuous lines showing many skylines strung together.

21 (In Memoriam), Screenprint, 2015 – This image is an abstract representation of an event which took place in Libya in February 2015 and represents a new departure in my work (the use of symbolism).  Blue meets yellow, red mingles with the blue, twenty-one circles in “Guantanamo orange” (or what I call “George W Bush orange”) are lined up along the edge of the yellow.  This print uses both stencil and hand painted positives.  R.I.P.

N.I.M.B.Y., Screenprint, 2005 & 2014/15 – This composition, based on a photograph published in the Independent, was originally done in 2005 as a small very rough screenprint.  I revisited it in 2014 with a view to making it “properly” as a poster addressing the conflicting issues of renewable energy sources and nimbyism.  The work was finished in June 2015 at a time when the debate was on-going and uses both stencil and hand drawn positives.

Children Can Change the World ….?, Mixed Media (household and acrylic paint, collage, and screenprint), 2015 – During my lifetime there have been a number of images that have become iconic and have had a major global impact.  The most recent of these (September 2015) featuring a small drowned Syrian boy made me recall others (the “Napalm Girl” in Vietnam, Eritrean / Ethiopian starving children; Malala) and this composition combines newspaper or magazine headlines (from both the time and later) reflecting the, often contradictory, consequences of the original event / photograph with pared down versions of those original images. (Acknowledgments: Nick Ut, Reuters).