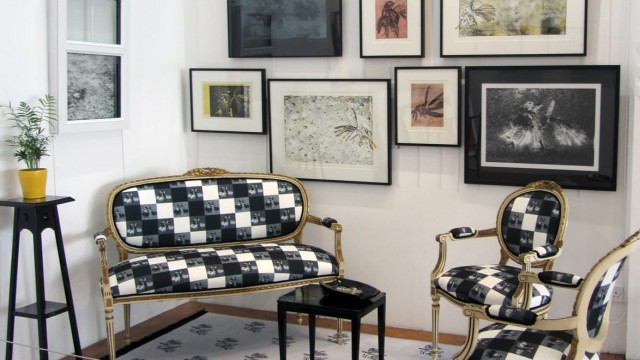 Returning from a few days away in 2008 we found the remains of a crow in the road outside our house (we were living in Wolverhampton at the time).  Before removing it I took a single digital photograph.  What fascinated me was that the carcass had clearly been both picked clean (by other crows?) and run over many times so that it had nearly disappeared into the road.  I became obsessed by this image and decided to dedicate an entire Semester at College to working on it in various media including both 3D and 2D.  It also gave me the opportunity to explore the idea of negative as well as positive (by manipulating the original image into large print screens) and to carry out various experiments.

What you see here is just a very small selection from the hundreds of prints I have made of the crow together with a resin cast.  The prints include linocuts, screen prints (2008) and etchings (2010).  There were also two paintings (destroyed) which were done using primer and old-fashioned liquid black gloss and sanding down between each coat; the crow itself was then sanded down through the paint into the primer – I have since applied this methodology to decorate pieces of furniture (see Birdland 2).  At that time (2008) I also made a set of ceramic tiles (now a table) and developed monochrome geometric designs for fabric and wallpaper as part of plans for an installation (a room called Birdland).  In 2008 I also made two large collagraph plates from which I took some proofs at the time but now (2016) I have started printing a limited variable edition (of up to 10 prints of each image) experimenting with colour, inking, dampness of (very heavy Bockingford) paper etc. to further emphasise the textural qualities of these plates and it is a couple of these recent prints that are shown here.

In 2015 this idea was brought to life in my show Diversions as an installation (Birdland 2) which included upholstery and a rug as well as the decorated furniture and prints.  An enlarged version (Birdland+) was then shown in London (February / March 2016).  Some of the furniture pieces were featured in an Open House as part of the 50th Brighton Festival.