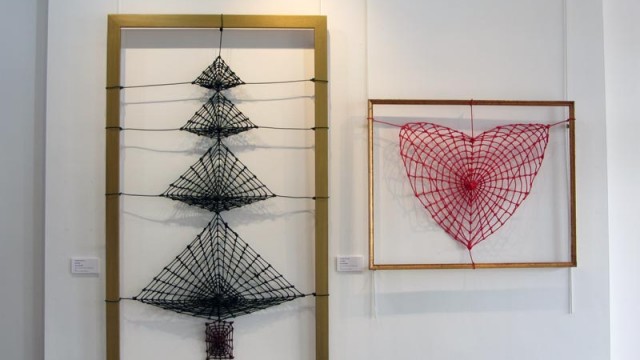 The making of webs is an important part of my practice.  It all started because, when we lived in Wolverhampton, we had a path down the garden lined with old Cypress trees – it was very beautiful and we called it “the Avenue”.  I started to imagine a very large spider’s web suspended across the path between two of these trees – and we are talking VERY LARGE!  The idea was to use some form of cord and weave a web copying the structure of a wheel web made by the orb-weaver spiders.

In the event, having experimented with various materials, I made a much smaller one (using 10mm white nylon cord) as part of a commission to make multiple site-specific interventions in a North London garden.  Next came The Red Heart Web (2011) made in the same way but aerosol painted (which gives it much more rigidity, texture and depth).  This was created and photographed for a fund-raising competition in aid of The British Heart Foundation.  In 2014 it was suspended in a different frame and shown in the Salon de Refuses exhibition at the Linchpin Gallery, Eastbourne.

Further exploring the idea that you could use the same technique to make different shapes, Christmas 2013 I ventured into making a multiple web – The Christmas Tree Web – which involved five different (in size and/or shape) webs linked by one single cord.

Both the Red Heart Web and The Christmas Tree Web were featured in my show Diversions at the Hastings Arts Forum (August 2015) and in Birdland+ (London – February / March 2016)  and were then shown in Open House 11 at the Brighton Festival (May).

I then started making a web (the Christmas Star) with the idea of photographing it up high in the sky (think cranes).  Although this was all some years ago now I have not given up on the idea of webs!  For instance, I was given two large ovoid “frames” and have thought of making two new webs using these (such as a broken heart and a broken egg – think Salvador Dali!).  These could take me further into the realm of 3D (double webs) and I still dream of making a really large site-specific web someday!

Please note that webs can be commissioned.