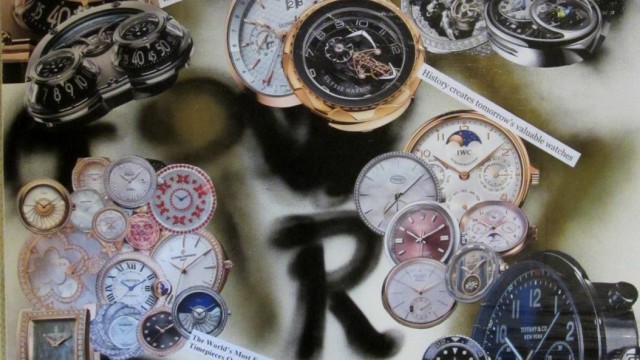 Collage 1 and Collage 2 – Over Easter 2008, as part of a College module looking at new ways of drawing, I made two large mixed media collages experimenting with paper, acrylic, acrylic gel, soft pastels and charcoal.  In one case (Collage 1) the first layer was multi-coloured tissue, in the other (Collage 2) bits torn out of a magazine focussing on consumerism (e.g. expensive watches, handbags etc.).

In 2015 I returned to this medium and developed some of my original use of materials and ideas / concerns.

Beatle-Mania, mixed media collage 2015 – Work about the Beatles isn’t something I would expect to be making – I was always a Rolling Stones fan and, in the early 1960s, you could not be both!  However, when I was asked on behalf of Macmillan Cancer Support if I would be willing to make and donate one of my collages to be raffled as part of Beatles Day 17 I couldn’t say no!  During my research and collecting source material, I began to focus on Beatlemania (which really was an amazing phenomenon at the time) together with fandom.  I managed to buy an original newspaper cutting about their concert at Shea Stadium which was their biggest gig to date and, probably, one of the biggest in rock and pop history at that time (about 56,000 people – almost all screaming girls!).  During my research I also started to concentrate on the years 1964/5 and I picked up ephemera about the Beatles’ Christmas fund-raising campaign in 1964 for “needy children” and this has also been incorporated into the collage.  The four sides of the collage are painted green, blue, purple and red being, according to fanzine trivia, the favourite colours of John, Paul, George and Ringo respectively.

D & G, mixed media collage including Dolce & Gabbana Collezione Autunno-Inverno 1992/93 Portfolio (photographs by Steven Meisel), 2015 – This collage was made, in the Summer of 2015, when I went back to making collages (see How To Spend It).  I had previously bought, at auction, a box of fashion presentation catalogues one of which was a loose-leaved portfolio for the D & G collection in the Autumn of 1992.  It was in poor condition so was able to use it (the others were all pristine and therefore could not be cut up).  I was struck by a combination of the use of black and white, the industrial landscape, and the faces of the models.  Someone commented, when I was working on this collage, that they had been commoditized by the make-up etc. and had lost all individuality / humanity – were mere dolls.  I don’t agree, I think they look very human and rather vulnerable.

How to Spend It – I, II, III & IV,mixed media collage (canvas, aerosol paint, magazine cuttings, acrylic gel (hand-applied)), 2015/16 -This set of four collages picks up on the underlying themes of glamour, ostentatious / trophy consumerism, and label fetishism which were first addressed in Collage 1.  The How to Spend It (HTSI) magazine comes out fortnightly as part of the Saturday Financial Times.  When Colonel Gaddafi was toppled from power and people entered his palace there were piles of HTSIs around the place.  I have taken cuttings from various issues, combined them with aerosol paint / graffiti and fly-posting to transform what was consumerist propaganda into an anti-consumerism message.  During my research for these pieces I realized that not only were such handbags, watches, jewellery and shoes bought in order to be used (and thus to show just how rich their owners were) but that they were also seen as investments (often containing precious metal and/or diamonds or other precious stones).  It really does beg the question of “just how much can you spend on a ………..?” and the answer, literally, is millions!

Lost, mixed media diptych, 2014 – My Mum loved shopping, particularly for clothes and accessories.  She died a few days before Christmas 2013 and afterwards I sent her personal effects to charity but amongst them found some single earrings.  I hate shopping but love socks and had kept four of my favourite (but singular) ones for many years. The image of my mother that I have used is, I think, her one and only passport photograph (taken in the mid 1960s when she was about 40).

Other collages can be seen in The Crow / Birdland.