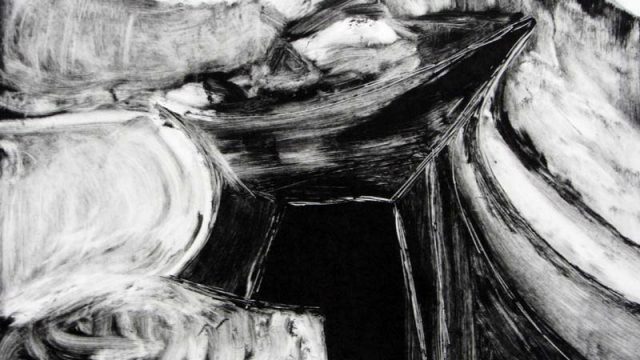 My interest in rock and stone – both Man-made structures and those created by Nature / the weather – has to do with both surface and texture combined also with my interest in destruction brought about by Man and/or Nature (i.e. most of the buildings are ruins!).

Abbey Dore is a set of six images, based on some of my photographs taken in 2014, on our way back from Wales, when we stopped off and walked around Dore Abbey, at Abbey Dore, Herefordshire, in the Golden Valley. We were the only people there.  The images take you on a journey around the 12th century Cistercian abbey and are thus related to my “a walk around” theme of work. Each is an original acrylic painting on paper overprinted with a screenprint using a photographic positive (2014/15).

In July 2016 I made a set of Monotypes (Caves, Graves & Temples) by rolling ink onto a piece of acetate and then drawing into / removing it create the image followed by printing it onto damp paper on an etching press. These were the first images I had made using this method.  They are all based on photographs (both digital and 35 mm black and white) I have taken in Sicily, Malta and Northern Cyprus and the monochromatic nature of this medium is particularly suited to the subject matter: rock shaped and carved by Nature and/or Man featuring caves (etched by the sea), troglodyte graves (carved by Man in situ), and ancient temples where Man has hewn and moved the elements of the structure.

Later on that year I made another set (Abbeys & Cathedrals) based on my photographs of various ruined Abbeys and Cathedrals.  Again the subject matter is stone but in this case shaped by Man, built and then destroyed.  I anticipate making another set in this manner st some stage – in this case the subject matter would be castles (but again ruined!).