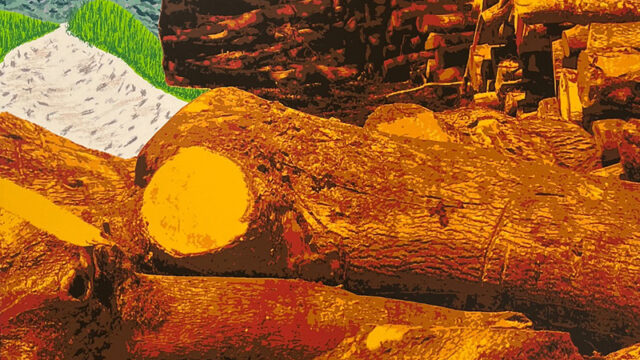 Trees and Roots is a large body of work which I started making in July 2016 which looks specifically at a combination of form, structure, and surface texture in relation to trees but, even more specifically although not exclusively, trees with externalized / above ground (even aerial) roots based on my own photographs (either digital or 35mm black and white film).  Some of the pieces have been shown in various exhibitions and a solo exhibition based on the series so far (called Of Trees & Roots and ……….) was held in Gallery 2 of the Hastings Arts Forum Gallery at St Leonards-on-Sea in July 2019.

Just as the structure of the actual trees is important so is that of the various pieces of work being a combination of dimensions (from very small to fairly large), format / orientation (almost square; long and narrow; portrait or landscape), and colour (often monochromatic).

Specifically: the first two works are a photo polymer etching and a photo etching on copper (made during a Summer School at the Slade) whilst the third is a mixed media acrylic painting made in May 2017 during a solo show called Black, White & Splashes of Colour in which numbers I and II were shown for the first time.  During the last quarter of 2017 I experimented with embedding woodcuts within a screenprint. The first completed work in this manner is number IV in tones of orange (finished February 2018) within which two layers of woodcuts have been embedded between layers 7 and 8 out of 11. Number V (Silver Birches) comprises three separate monotype screenprints (effectively a triptych). Number VI (again a triptych) comprises three screenprints incorporating the use of graphite and varnish. Numbers VII and VIII are very small being, respectively, ten charcoal drawings (Blasted Trees) and nine “rubbings” of the woodcuts (in charcoal, Indian ink and varnish).  Number IX (a screenprint finished May 2018) has multi-layered stencil background overprinted by a single photograph and shows the Millennium Bridge (Tate Modern) and some Silver Birches. Numbers X and XI) are again screenprints with embedded woodcuts (in tones of blue and green respectively). Number XII is a ceramic sculpture set on a bespoke wooden base. Number XIII is a screenprint (white, black and lots of shades of grey) as is XIV (in sepia tones and featuring mark making).  Number XV again combines woodcut with screenprint but, in this case, the former is not embedded but is a major feature of the work being a large reduction woodcut with screenprint elements. Number XVI is another screenprint (a companion in both subject and format for XIV but this time in tones of purple). Number XVII is three large photographic digital prints (C-type on Kodak metallic paper). Number XVIII is another ceramic sculpture which was finally finished in October 2019.  Number (XIX) looks at dead and diseased trees in a more abstracted and sculptural manner.  After a lot of experiments the work evolved into being three triptychs each with three images of the same tree using different exposures of three hand positives.  The images reference trees, standing stones and figures (e.g. Rodin).  The palate is silver, blue/grey and grey.  At the same time I started a new ceramic sculpture related to the three elements of the triptych (XX).  This piece was, finally, finished and brought home in December 2020 (some 15 months on having been locked in during lockdowns!).  After a combination of lockdowns and a major diversion (during which Lines I to VI were produced) June 2021 saw a return to Trees & Roots as number XXI (being a set of three images based on photographs of ash die-back in the South Downs area acting as a “storyboard” but each being very individual).  These are 48 cms square.

In case you’re wondering, the numbering system is purely sequential / chronological and of no other consequence!