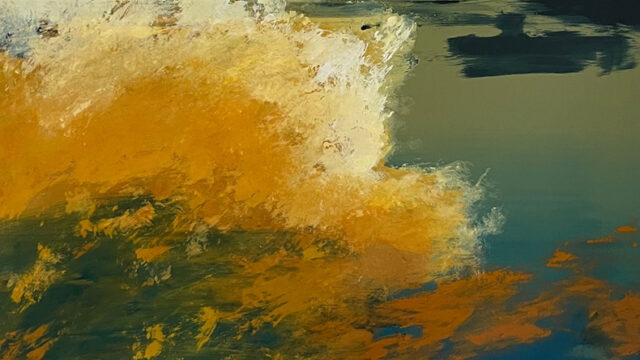 Skyscapes – We moved to Eastbourne in 2009 and, during the winter months, we have a spectacular view from our bedroom window of the sun rising over the sea.  Since that time I have taken around three and a half thousand digital photographs of the dawn sky.  From time to time I have also taken night-time views.  In 2016, as was always the intention, I finally started using these photographs as source material with a view to creating, over time, a large body of work titled Skyscapes and made numbers I to V.  However, after a short while I then started on Trees & Roots instead then followed by Lines and more Trees & Roots so didn’t return to Skyscapes until 2022 when I started making a series of multi-screen monotypes.  In each case the background is printed as a blend with a small number being made at the time (say 3 – each being slightly different).  Then any number of screens are printed onto one of the backgrounds to build up the image.  I may work on a number at the same time.

As with Trees & Roots and Lines, the numbering system is purely sequential / chronological / group them together and of no other consequence.