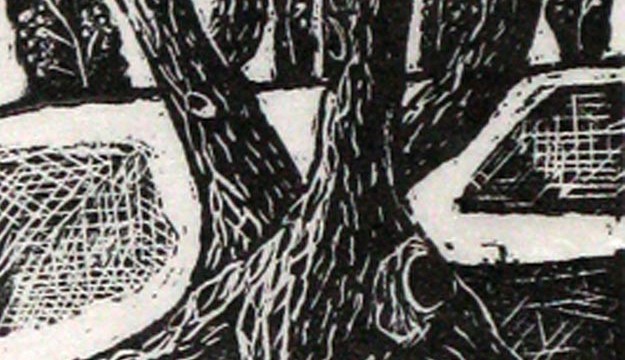 I am very conscious of the English tradition of wood engraving and have found that the small size (say 3″ x 4″) enables me to draw in a much more detailed manner. Whilst the subject matter is different in each case I have tried to unify them by adopting certain “conventions” (e.g. for the foreground and the sky). There is something very satisfying about sitting and quietly cutting away the wood to leave an image in relief.

DEAD TREE, WILLINGDON, 2011/12 – Butts Brow, Willingdon is a beautiful area near Eastbourne and this engraving is based on a single black and white 35mm film photograph taken during a walk there.

BROKEN PAMPAS, EASTBOURNE, 2012 – There is a large pampas in our front garden. When the snow falls the plant cannot carry the weight and the fronds break and fall. This engraving is based on a set of digital colour photographs taken in the winter of 2011/12. It follows on from Dead Tree, Willingdon.

ARTICHOKE, EASTBOURNE, 2012 – There are two large artichoke plants in the vegetable patch at the bottom of our garden. This engraving is based on a set of digital colour photographs taken in 2012.

STILL LIFE – SHALLOTS, GARLIC & ROSEMARY, 2014 – In our kitchen there is the original Edwardian meat-hook and, from time to time, we hang things from it to dry or mature. This engraving was printed onto Chinese calligraphy paper (hence the rather different effect).

POPPIES, EASTBOURNE, 2015 – In 2015, for the first time, down in the vegetable patch at the bottom of our garden where the artichokes are, there was also a mass of poppies.  Some were pinky purple and some purply pink, some were single and some were double. The bees and butterflies loved them.

THISTLES, BIRLING GAP, 2016 – One of the many walks over the South Downs takes you to Birling Gap, a spectacular cove giving views of the Seven Sisters cliffs in one direction and towards the Belle Tout lighthouse in the other.  Just behind you is scrubland covered in thistles.  This engraving is based on a set of 35 mm black and white photographs taken on such a walk.