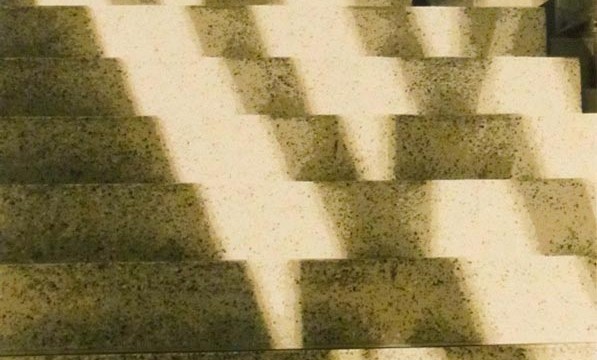 In 2014 I returned to screenprinting, exploring various methods of making the positives (stencil, hand and photographic) and experimenting with using them in various combinations within the same print.  I have also been looking at “different ways of seeing” by trying to create slightly distorted views.  As you can see, we travel quite a lot given that all of the following works are based on my own photographs.

Skopelos 1 and 2, 2014/15 – On 12 September 2014 I took two photographs sitting on a first floor balcony (a bar!) looking out over the harbour at Skopelos, Greece showing the reflections of the night (-life) lights.  These were the basis for Skopelos 1 and 2 which are multi separation screenprints using stencil, hand (Indian ink with methylated spirits) and photographic positives.

San Francisco, USA, 2015 – This image represents a further step in my exploration of using multi-separation photographic positives to create screenprints, the cross-over between abstraction and realism, and of shadows and reflections.  This photograph was taken in an art gallery in San Francisco and specifically composed in order to create this print. I had to wait ages for the sun to come back out!

Aix – Homage à Venet, 2015 – The final stop in a short tour of France was Aix-en-Provence where four large abstract metal sculptures by Bernar Venet (French conceptual artist, born 20 April 1941) had been installed in public places for the Summer (2015).  This image shows a small abstracted section of one of these works and is based on one of the many photographs I took at the time.

06:13 A.M. 10/09/15, Eastbourne, 2015 – Somewhat nearer home!  From our bedroom window you can see the South Downs but also have a panoramic view of the sea and the seafront.  Since moving to Eastbourne (2009) I have taken around two thousand photographs of that view, mainly at dawn during the Autumn and Winter.  This image is based on one of those photographs and shows the sun rising behind the fog.  By the use of colour, textures / mark-making (painting with Indian Ink), and the screenprinting process I have tried to create a floating, ethereal and slightly surreal effect.

Passariano, Italy I & II, 2016 – In 2005 we stayed for a few days in Trieste and whilst there we caught a bus out to the Villa Manin in the village of Passariano.  This Venetian villa was the residence of the last Doge of Venice and Napoleon Bonaparte and Josephine lived there briefly in 1797.  The villa was restored in the 1960s and houses a museum.  For a short period (2004 to 2008) it was also a contemporary art centre and it was during that time that we visited it. When we arrived it was all set up for a posh reception but walking through the building took you out into the park where there was an exhibition called Luna park fantastic art – sculpture in the Park which was fascinating.  The exhibits included a shiny metal cube which you could enter. These screenprints (using stencil and hand-painted positives) are based on some of the photographs I took of that exhibit.

Valletta, Malta, 2016 – This image represents a further step in my exploration of using multi-separation photo-graphic positives combined with an element of optical illusion – in this case a 3D effect. This steep, narrow, balconied street is typical of Valletta.

Innsbruck, Austria I, 2017 – Innsbruck had been on a list of places I had wanted to visit for a long time.  Having been due to see Zaha Hadid in conversation at the Charleston Festival 2016 (an event which was replaced by a panel discussion following her sudden death) we decided to go (almost as a kind of pilgrimage). It is, as expected, a lovely small city nestling amongst the mountains.  The sequence of photographs used as the source material for this image show multiple reflections in a multi-plate vertical glass wall – including those of one of the Nordpark Railway Stations which she designed. This screenprint follows on from Valletta, Malta in using 3D type visual effects.

Aix – Homage à Cézanne, 2017 – During our visit to Aix-en-Provence (see above) we took a bus out of Aix passing Mont Sainte-Victoire on the way.  This image is based on a number of photographs I took out of the bus window and attempts to convey a feeling of motion / of going around the mountain by using two images for each layer (apart from the final photographic one) combined with stencils for the background and the sky and by using semi-transparent inks.